A quick history lesson, or refresher:  Juneteenth, also known as Emancipation Day, is celebrated on June 19.  It is a commemoration of June 19, 1865, when slaves in Galveston, Texas were informed that they were free.  It has spread to become a day of celebrating the end of slavery in this country.  Check out Juneteenth.com for more information.

I decided that it would be a fun tradition for us to celebrate Juneteenth each year.  I was a completely clueless as to how one celebrates this day, but I did a little research, and then pretty much made up my own traditions.

During the day, I took the kids to Salt Lake, where we attended the Utah Juneteeth Celebration Kick-off.  They have a big Juneteenth Festival in Ogden every year (which we will probably go to next year), but this was just a smaller kick-off party.  I had no idea what to expect, and to tell you the truth, it took me a little out of my comfort zone, but we had a really good time.  It was not at all what I expected.  I thought it would be a festival like thing where there would be a ton of people and I could roam around and blend into the crowds.  When I got there I discovered that there were only about 50 people.  It was such a joyful, fun group though.  There were African drummers and dancers that were absolutely amazing.  Zoe loved dancing to the drummers.  She wouldn't let me touch her while they were drumming, she just stood on the sidewalk and bopped up and down.  After the drummers, we went inside and listened to some very talented Gospel singers.  Robby was experiencing a little culture shock, so he didn't know what to think, but Zoe thought it was great.  She was yelling and singing and clapping right along with them.  Everyone kept commenting on how cute she was.  I think she really had a good time.

Here are some pictures from the party. 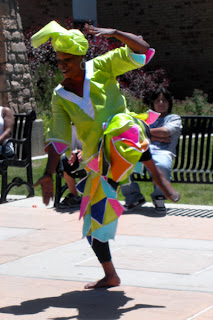 One of the dancers.  They wore the most beautiful, bright clothing and had the coolest dances. 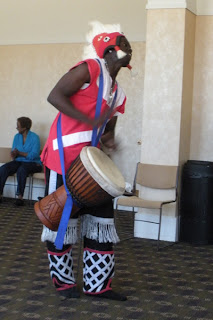 One of the drummers. 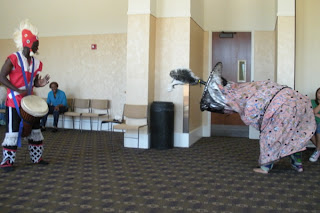 I don't know how to explain this guy.  Basically, it was a man dancing inside of this fabric tube.  This is where I show my ignorance because there may be some significance or importance to this dance, but mainly, I just thought it was really cool.  It was amazing how he moved around inside this tube.  It was very fun to watch.

All in all, I was very glad that we went and we will definitely be going back again next year.  I think that is important that we show Zoe that we value her history and culture.  I also think that it is important for both of our kids to be exposed to different cultures and to learn to respect others.  I know that I learned a lot at the Juneteenth party and also had a blast, so I hope my kids did to.

This evening we continued the festivities at home by eating grilled steaks, mac and cheese, and strawberry soda, (I am not quite sure why strawberry soda, but it is a traditional drink of Juneteenth and it is kind of tasty) while listening to some old Gospel music.  It was a lot of fun and I am sure it will evolve into our own special Juneteenth tradition as the years go on. 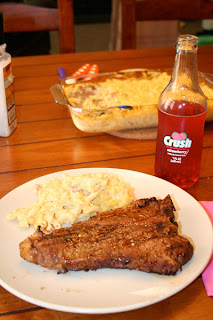 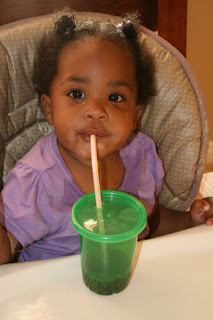 Zoe really enjoyed the soda.  She probably would have downed a whole bottle if I had let her.

I really am excited to make the celebration of Juneteenth an annual tradition in our home.  It is a great opportunity to focus not only on the end of slavery in this country, but also on freedom in general.  I think we all take our freedom for granted sometimes and it was nice to have to a day to really think about what it means to be free and how blessed we truly are.
Posted by Alice at 3:46 PM