Baseball, Pizza, and One Big Cat

We had a crazy evening tonight consisting of watching Robby's baseball game, going out for yummy pizza, and...

Here is the story.  We drive home from having dinner and find a police car blocking the road into our neighborhood.  He tells us that since we live there, we can go through, but we need to close all of our doors because there is a mountain lion in one of the neighbor's garages.  As we drive up to our house, we see a bunch of our neighbors standing otuside our next door neighbor's (Jeff and Melissa's) house.  We tried to stay in the house and watch what was giong on, but by that time, there were quite a few people outside, so we just decided to go out and join them.

I guess we missed most of the excitement since we were at the game.  From what I understand, sometime between 7:30 and 8, the mountain lion had been spotted down the road a ways.  People (maybe including police, I'm not sure), were chasing it in cars, trying to get it out of the neighborhood.  We live on a horseshoe shaped road and they chased it in on both sides.  Our neighbor's garage door was open, so it ran inside.  Jeff was in the back yard, jumping on the trampoline with his two little girls when he heard people yelling.  They closed the garage door, and the cougar was trapped.

After we got home, DWR came and tranquilized the cougar.  It was crazy, when they shot him, you could hear him bang against the garage door.  He didn't go to sleep, so eventually, they had to go in and shoot him again.  Finally, about 9:45 or so, he fell asleep and they brought him out and took him away.  They said that they will let him wake up and then release him again in the wild.

Everyone was lucky that nothing bad happened.  There was no real damage done, except for a little cougar pee on the floor of my neighbor's garage and some claw marks on the inside of their garage door.  (Jeff is a huge BYU fan, so he thinks the claw marks are pretty cool.)

It did make for a crazy evening in the neighborhood.  By the time it was all done there was quite a crowd standing in our driveway watching the drama unfold.  It was on the news and everything.  I was even on the news for a brief second.  (They haven't posted the video footage online yet, but if they do, I will link to it here.)  It was definitely an exciting night for all of us.

Here are a few pictures of the cougar.  I did not take these pictures.  I went out with my Rebel, excited to get some good shots, but when Jeff saw that I had a good camera, he asked if he could borrow it to get some pictures.  Since it was his garage they actually let him go in to take the pictures, meaning he could get much better shots than I would ever get.  These pictures were all taken by him, with my camera. 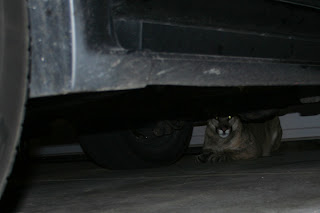 The cougar was obviously terrified, and hung out mostly under their car.  He took this picture after they tranqued the cougar the first time.  He was still awake at this point. 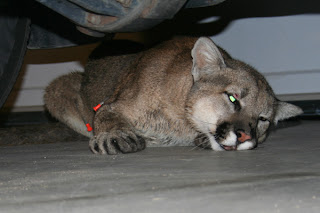 Here he is once he finally fell asleep.  You can see the darts still in him. 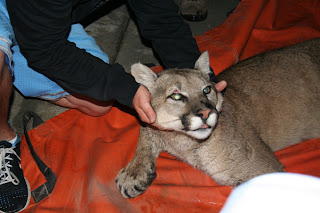 After they pulled him out, they let my neighbors pose for a few pictures.

It really is a beautiful animal.   I think sometimes we foget how close we live to such amazing, wild animals.  Usually, we all keep to ourselves and life goes on quietly, but every once in a while, when our paths cross, things get a little crazy.  It is kind of sad that the poor cat had to go through such a traumatic experience, but I am glad that it all worked out well in the end, for him (or her), and for all of us.
Posted by Alice at 5:18 PM