We love Disneyland, and this trip was a lot of fun.

Our plane left at 7:30 Saturday morning, so we were up and going way too early.  We got to California at 8:30 and by 10:00, we were in Disneyland.  Our flight home left at 7:30 Wednesday night.  Since we didn't have a car, we decided we would only do Disneyland instead of trying to get around to anything else.  That meant we were at Disneyland for almost 5 full days. That's a whole lot of Disney.

We were tired by the end, but we still had so much fun.  On the last day, Kirk and I actually decided to upgrade our family's passes to Annual passes.  We are planning on going back sometime around March as a family, for our anniversary in December (just the two of us), and maybe even a quick trip in October.  Then we will probably be burnt out and not want to go back for a couple years, but who knows.

My favorite part of the trip was just enjoying being together.  I had a blast just hanging out with the family and seeing how much fun the kids have.  We really enjoyed all the rides.  The new Toy Story ride was absolutely amazing.  It had the longest lines in the park, but was so worth the wait.  We rode it 3 times and would have loved to ride it many more.  We ate some good food, saw amazing fireworks, and in general just had a good time.  We even saw Guy Fietti, from the Food Network, hanging out at California Adventure, which Robby thought was really cool. 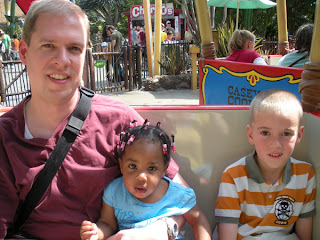 enjoying the rides in Bugs Land 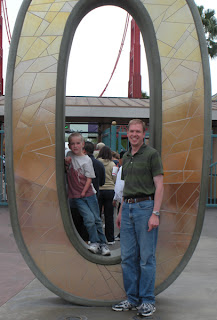 We have a tradition of taking a picture of Kirk and Robby in the O at California Adventure every time we go to Disneyland.  It is really fun to see how much Robby grows and changes. 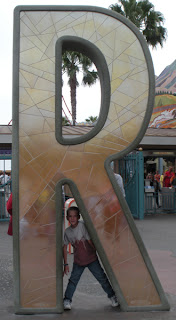 We also always take a picture of Robby in front of the R. 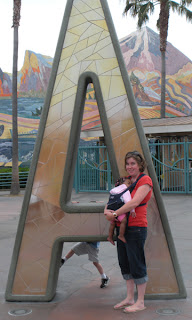 I decided we needed a picture of us girls too.  I chose the A, not so much because it is the start of my name, but because there are two of them so we didn't have to wait for anyone to finish taking pictures before we could.  Unfortunately, we didn't take this picture until we were leaving the park on the last day, and poor Zoe was all tuckered out.