Disneyland Part 2 or What Happened to My Baby Boy

Scroll down to see part 1.

Robby had a great trip.  It was so obvious to me throughout this trip how much he is growing up.  He is definitely not the little boy, who was so excited at meeting Rollie Pollie Ollie in real life, anymore.  He now loves any ride that is roller coaster like and said that he thinks Disneyland is way more fun at night.  We probably don't have much longer before Disneyland loses its excitement for him a little.  We will have to start spending a day at some of the more exciting amusement parks when we take a Disneyland trip to keep him satisfied (which isn't a bad thing.)  For now, though, he thinks the big rides at Disneyland are just perfect.

His favorite rides at Disneyland were:

1. California Screaming.  His first upside down roller coaster.  He was so excited that he was finally tall enough to ride this.  I was worried it would terrify him once he actually rode it, but I couldn't have been more wrong.  He loved it!!  He rode it a ton of times, and got really good at going through the single rider line so that he didn't have to wait in line.

2. Space Mountain.  Roller coaster in the dark, what's not to love.

3. Toy Story Midway Mania.  The only non-rollercoastery ride on the list.

6. Splash Mountain.  This one was higher on the list until the last time we rode it and he got completely soaked.  He did not find that funny, and demoted Splash Mountain a little.

I always hate it when people take pictures of their picture on the preview screen, but I just couldn't pass this one up (and couldn't bring myself to pay $15 for it).  This was Robby's first ride on California Screaming.  Look at that smile.   And the rest of us weren't having too bad of a time either. 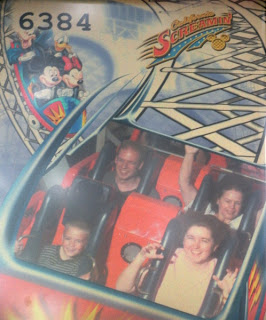 Robby and Grandma on the Matterhorn.  I don't know which one of them was having more fun. 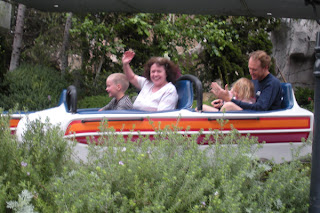 Even though he loves the big rides, he still has a lot of fun on the not so exciting rides, like the Bugs Life Bumper Cars. 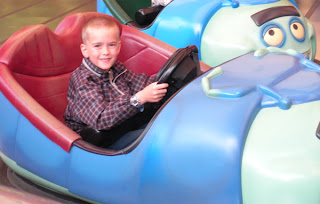 In front of Small World. 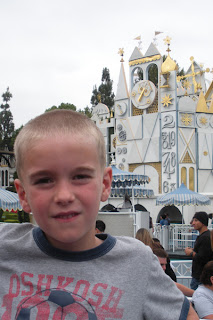 Rob and Kirk on the train. 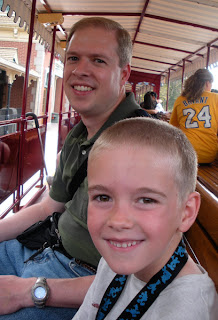 Robby also got into pin trading during this trip.  He loved going up to cast members and trading pins with them.  It left him with a fun souvenir that means something to him and that he can add to and change every time we go.  Hopefully, this will give him something to look forward to at Disneyland, even as he gets older. 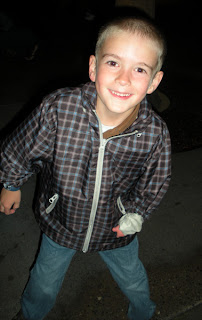 That smile is why I love Disneyland.
Posted by Alice at 4:38 PM