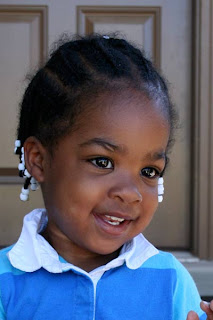 Since Zoe has been two for three months now, I guess I should finally post an update of what she is doing now that she is two.

Zoe loves to talk. It seems that if she is awake, she is either talking or singing. She has a big vocabulary and we have full conversations. It is really fun to listen to what she has to say.

Zoe is a pretty smart kid. She is always asking questions and wants to know about everything. She knows her colors, shapes, can count to twelve (although she has no clue what numbers mean really), and can sort of say the alphabet.

Zoe is developing her sense of humor.  Right now, she thinks it is hilarious to sit in someone else's chair.  This means, that anytime any of us stands up, she promptly runs and jumps into our chair, laughing the whole time. This was pretty funny, the first 10 or 20 times she did it. She still thinks it is the funniest thing in the world though.

Zoe loves people. She likes to talk to absolutely anyone, especially adults. The other night, I had book club at my house. Zoe was supposed to go upstairs and hang out with dad, but she just couldn't do it. She wanted to be downstairs with "the girls." She was in heaven with all those people willing to pay attention to her.

Zoe never stops moving. She is an incredibly active little girl. She is always busy, always doing something, and never holding still. She has a ton of energy.

Zoe is feminine. She loves to paint her toenails, wear pink, wear dresses, and loves shoes and accessories.  But, she also loves dirt, bugs, cars, and wrestling with Robby.

Zoe loves music. She is always dancing and singing. She knows tons of songs that she is always belting out, but she is pretty good at making up her own as well.

Zoe is spunky. She has a lot of attitude. She knows what she wants and isn't about to back down until she gets it.

Zoe is a trouble maker. She knows the rules and knows when she is breaking them, but she is okay with that. She is definitely a handfull.

Zoe finally got rid of her pacifier. We tried a couple of times to take it away and it didn't go well (basically she refused to sleep without it and after a couple of sleepless nights, we gave up.) Finally, in the middle of the night one night, I couldn't find it and so I told her it was lost.  She said ok and went back to bed. She never wanted it again after that.

Zoe loves food. She will eat almost anything, although she is starting to show a lot more preferences now.  We are starting to hear "I no like that", on occasion, although usually two seconds later, she is munching away on whatever it is she no like.

Zoe loves Mickey Mouse, Princess and the Frog, and Mary Poppins. She loves reading books, pushing her stroller, and playing in her kitchen.

Zoe is a drama queen. It is very easy to hurt her feelings. She likes to cry. The other day when I told her it to stop crying she said "But I want to cry."

Zoe is a clean freak. She hates food on her fingers or crumbs on the table, and will promptly wipe them up whenever she sees them. However, she has no problem rubbing dirt all over her body or throwing toys all over the floor.

Zoe has pretty much the whole world wrapped around her finger. She gets away with way too much. She has the kind of personality that everyone is drawn to. She loves to be the center of attention and has a personality that cannot be ignored.

Zoe is our little princess. She makes our home a happier, more exciting, better place. She definitely is a handfull, but we wouldn't trade one minute of it.

Here are some random pictures from the last few months.

Look at how much she has grown. I can't believe how much more grown up she is and how much her hair has grown.
Posted by Alice at 10:18 AM