We are playing around a little bit with the layout of my blog.  The pictures are really small, but if you click on them, they will come up bigger and you can click through them all.

The kids and I had a very, very fun summer.  There were very few days that we stayed home.  We were almost always out doing something.  Because of that, I rarely had a free minute on my computer, meaning I got even more behind on my blogging than usual.  I am going to try to get caught up in the next couple of weeks, so hopefully I will be posting something about our summer every day.

As soon as school got out, we got started with our crazy summer.  Robby started tennis lessons and both of them started swimming lessons.

Robby has never been a huge athlete.  He has tried almost every sport available to him, but has had very little interest in any of them.  The last year or so, he has been asking me if he could take tennis lessons, so this summer we got him signed up to try it out.  He loved it.  He felt really comfortable on the court playing tennis.  He had a couple of really fun teachers and learned a lot. It was a pretty simple tennis class where he just learned the very basics, but it was a good start.  We found out that it something he really enjoys, so maybe next summer, we will get him a little more involved.  Zoe liked tennis lessons too.  The tennis courts were at the park, so she got to go down the slide for an hour while Robby played tennis. 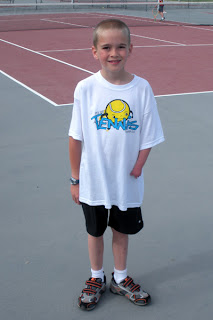 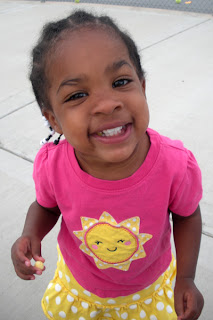 A week after tennis lessons started, Robby and Zoe both started swimming lessons.  Robby has never been a big fan of the water and has always hated getting his face wet.  The last couple of years of swimming lessons have helped a lot.  This summer, he did great.  He was swimming underwater, front floating and back floating, jumping off the diving board, and enjoying all of it.  I am so proud of him.  I know that swimming is something that has always been a bit of a challenge for him, but he has worked hard and is now really comfortable and happy in the water.

Zoe has always loved the water.  The main reason I signed her up for swimming lessons was because I knew it would be almost impossible to keep her out of the pool while Robby was swimming.  Her swimming class was a mom and me class, so we got to do it together.   Her class was mainly just to teach kids to be comfortable and have fun in the water.  We sang a lot of songs and played a lot of games.  Every class we would sing "Ring Around the Rosies".  When we got to "ashes, ashes, we all fall down," we would dunk the kids under the water.  Zoe hated it.  She got to where anytime anyone mentioned Ring Around the Rosies, she would panic and say "I no want it."  I was a little worried that swimming lessons was actually hurting her confidence in the water.  After swimming lessons were over though, I noticed that anytime we went swimming and she accidentally went under water, she would just smile and say "I went Ring Around the Rosies".  By the end of the summer, she was going under water just because she wanted to.  She had a lot of fun at swimming lessons and I think it was good for her too. 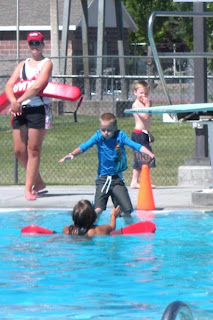 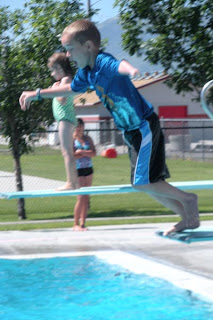 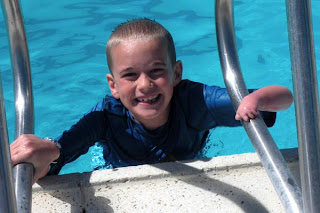 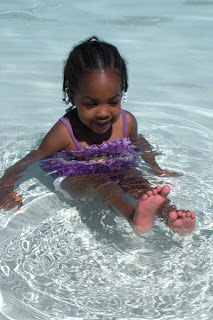 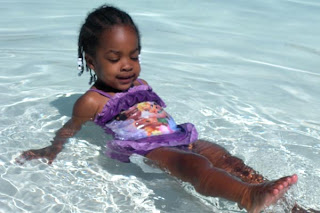