We finally did end up doing a little trick or treating.

Robby had been feeling a little bit better all Halloween afternoon and had a hard time deciding if he wanted to go trick or treating or not.  Finally, about five minutes before the start of the ward trunk-or-treat he decided he felt good enough to go out.  So, I had 5 minutes to get them both ready.

The last couple of years, Robby has insisted on wearing something "Halloweeny" for his costume.  Last year he was a skeleton, this year he decided to be a ghost, and he is already talking about possibly Frankenstein for next Halloween.  I decided to just keep it simple and dress Zoe up as a ghost too.

Last weekend, when we went trick-or-treating downtown, Robby had his face painted white and his costume looked pretty cool.  We just didn't have time to paint his face this time, not to mention that since he was sick, he did not have the patience to sit still and let me do it.  So, his costume didn't look quite as cool, but I still think we had two pretty good looking ghosts.

Robby walked around the church parking lot, got a little candy, and then was ready to come home.  That totally did him in.  I think the fresh air did him good though and he has been feeling much better ever since.  We are all just glad he got to celebrate Halloween a little bit. 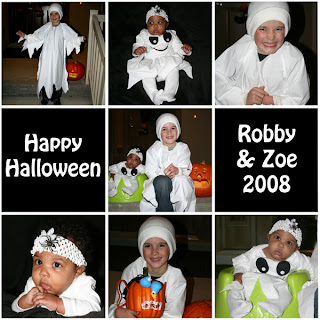