Halloween at Our House

This is what Halloween looks like at our house this year. 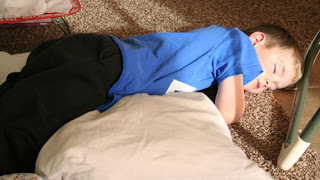 Robby has been sick for the last couple of days. Yesterday he stayed home from school. He missed a field trip. Today he missed his school Halloween party. We had all sorts of fun plans for today, but instead, we are just staying home in our pajamas and watching a movie. Poor thing. I feel so sorry for him; what a terrible time to be sick. He has stayed pretty positive through it all though and I do think he is starting to feel better.

Robby has never been a napper, but being sick his poor body definitely needs the sleep.  Even being sick, he still couldn't manage to fall asleep on the couch.  I left the room for a while and when I came back, I found him here, asleep on the floor, sprawled over the pillow, with his head resting on the tile.  It couldn't have been comfortable, but at least he got some sleep.

Luckily, last weekend, the city had trick or treating downtown, so Robby and Zoe got to wear their costumes and do a little Halloweening.  Of course, I didn't take any pictures because I thought I would do them all today.  Oh well, they are both going to have to get in their costumes one day next week so I can at least get some cute pictures.

Here is a picture of Zoe on Halloween. 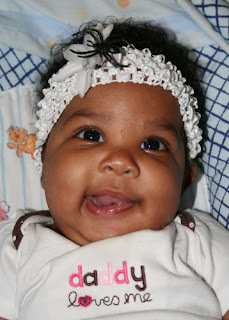 I didn't put her costume on her since we aren't going anywhere, but I at least had to put a spider in her hair to make her somewhat festive.
Posted by Alice at 10:57 AM