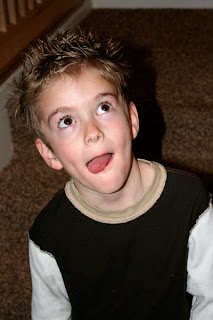 For April Fools Day, the 1st graders at Robby's school had Wacky Wednesday.  They were supposed to dress wacky, do their hair wacky, and they did everything on a wacky schedule.  Robby has a real problem with days like this.  He is a rule follower and a perfectionist in many ways.  In his mind things should be done a certain way and any deviation from that really throws him off.  When he was two, he had a schedule of clothes that he would wear.  The day after laundry day he wore his red shirt, the next day his blue one and so on.  He would melt down anytime I tried to get him to wear something that wasn't in the schedule, and I don't even want to remember the trials we went through when he grew out of those clothes.  In preschool, he refused to wear anything that they made in class (hats, necklaces, anything).  He though that they looked funny and they were not normal things to wear so he was not going to do it.  We did finally have a massive breakthrough in kindergarten when he let me do his hair spiky for crazy hair day.  So this year, we were ready to go all out for wacky wednesday. 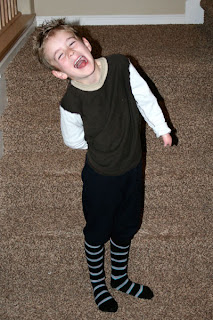 He wore his pajama pants tucked into a pair of my socks, he wore his shirt inside out, and he let me spike his hair.  It just about killed him to do it though.  Our conversation on Wednesday morning went something like this:

R: Mom, are you sure it is okay that I am wearing these weird clothes.

M: Yes, I'm sure.  It is Wacky Wednesday, you are supposed to dress weird.

R: Ya, but only the 1st graders are having Wacky Wednesday.

R:  What if the principal sees me? Will he know that the 1st graders are having Wacky Wednesday?  Will he care that my hair looks weird?  What about when I go to lunch?  Will they let me have lunch when I look silly?

M: It will be fine bud.  Everyone knows that it is Wacky Wednesday.  Everyone will think you look great.

R:  But mom, there are security cameras like every 2 feet in our school.  I don't know if it will be okay.

I did manage to convince him that everything would be okay.  He wore his crazy clothes and crazy hair and he survived it.  In fact, I think he even enjoyed his day.  The moment he walked in the door after school though, he asked me if he could change his clothes and if I would fix his hair.  I am sure that it drove him crazy all day.

For dinner, I told him that we were going to have dessert first. 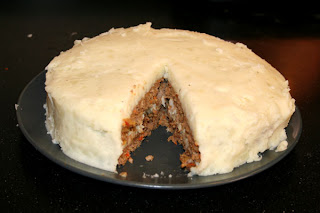 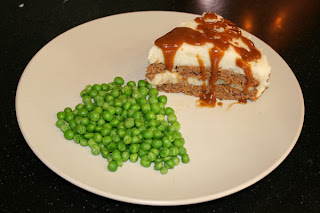 We had meatloaf and mashed potato cake.  It didn't look quite like I wanted it too, but it fooled Robby.  He really thought I was going to let him eat cake for dinner. 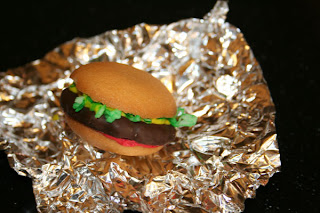 After dinner we had cookie hamburgers, made out of Vanilla Wafers, Grasshopper cookies, frosting, and coconut.  They were lots of fun.

Robby struggled a little bit even with the April Fools dinner idea.  I kept telling him that he needed to eat his dessert so he could have dinner.  He kept telling me that it wasn't actually dessert that we were eating, it was dinner.  He could barely handle it that I was saying it wrong.

Robby's perfectionism and gullibility are two of the things I love most about him, but I am very thankful for days like April Fools Day that help him learn to lighten up a little. It is fun to watch him struggle with something that he knows isn't quite right, but still have fun with it at the same time.  At least for his sake, April Fools Day is only once a year.
Posted by Alice at 2:37 PM