We left Juneau, early in the afternoon, and headed to Tracy Arm Fjord towards the Sawyer Glacier, luckily, leaving the rains of Juneau behind.

Tracy Arm Fjord is a thin waterway, about 30 miles long, that ends with a large glacier, Sawyer Glacier. It was the most scenic area we saw while on the cruise ship. It was amazing.

If you ever get the chance to go on a cruise, especially to Alaska, and you can afford it, I would suggest splurging on a room with a balcony. We didn't get a balcony room, but Kirk's parents did. When we went into the fjord, Kirk and I spent a little time out on the deck. It was really windy and cold though, and there were so many people, trying to see the scenery. So, instead, we went and hung out on Kirk's parents balcony. It was sheltered from the wind, so it wasn't nearly as cold. There was more than enough room for us, and we got some amazing views.

We sailed through the fjord towards the glacier for a couple of hours. 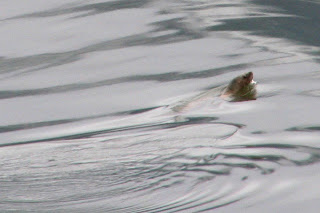 We saw this little guy next to the ship. I think he is a sea lion, but I could be wrong. 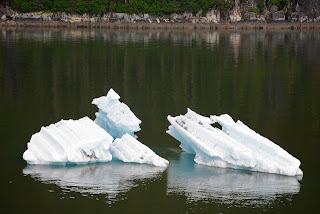 There were amazing icebergs that had broken off the glacier all through the 30 mile fjord. They were so pretty. Each piece of ice was so unique in color and shape. They were incredibly blue. The closer we got to the glacier, the more ice we saw. 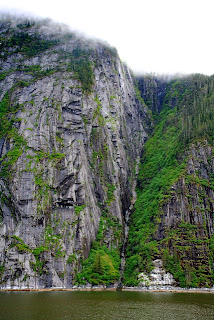 The scenery was pretty breathtaking as well. There were such rugged mountains contrasting with incredibly green trees. 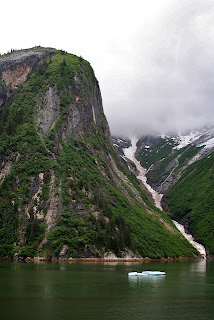 You could see where the water, snow and ice from the snow and glacier runoff had carved paths into the mountains. 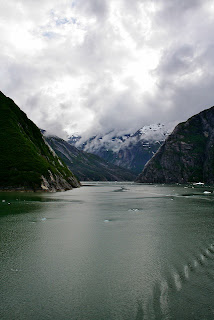 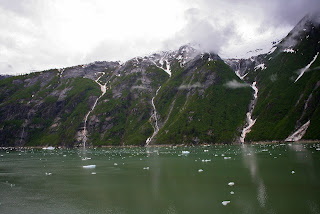 There were probably hundreds of runoff waterfalls. 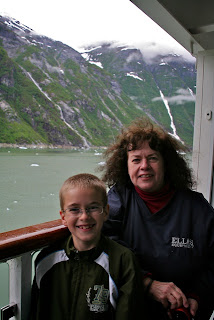 Robby really liked seeing all the ice and scenery. Zoe was at kid's club most of the time. 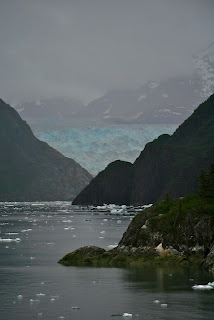 Our first view of the glacier. 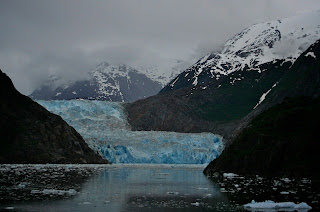 Our taxi driver in Juneau had told us that the cruise ships didn't get close enough to the glaciers to see anything, so we were surprised by how close we got. The captain turned the ship so that each side got a few minutes to just look at the glacier. 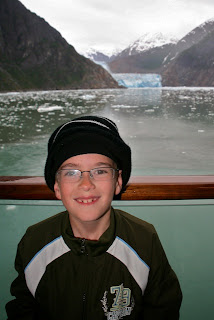 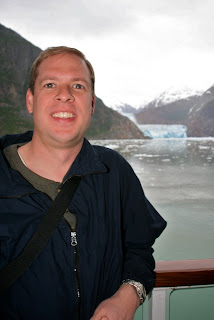 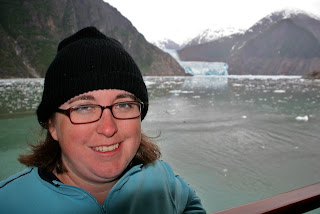 We did go and get Zoe from kid's club so that she could see the glacier, but she wasn't interested. She wouldn't stand still long enough for me to take a picture, preferring to explore grandma and grandpa's room instead. 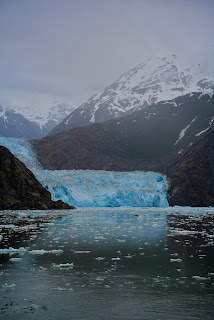 One final look before we sailed back through the fjord.

The glacier was one of my favorite things that we saw on the cruise. It was amazing. You really can't capture it in a picture, it is so different to see it in person. The size (and it was only a little piece of it that we saw), the color, the crazy amount of ice it had shed into the ocean miles and miles away, was all pretty cool. We didn't see it calving, which would have been awesome, but it was still a stunning site that we will never forget.