Last week, we went with Kirk's parents on a cruise to Alaska.  It was absolutely amazing. We had a lot of great experiences and I took about 800 pictures (I promise I am not going to blog them all.) There is way to much to show and tell for one blog post, so I will be spreading this out over the next week or so. 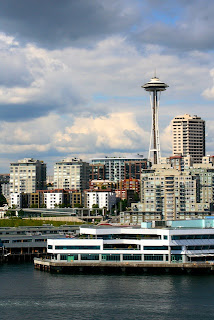 Our cruise left from Seattle, so, bright and early Saturday morning (about 5:30), we headed to the airport. We had a great flight. Zoe was really excited to go on the airplane, but about 5 minutes after take-off she was ready to be done. She did really well though.

We didn't get to do anything in Seattle, we just hopped on a shuttle that took us strait to the port. Once we got there, we were actually able to get on the ship in not too much time. We grabbled some lunch at the buffet and then spent some time exploring the ship.

I took lots of pictures as we sailed away. 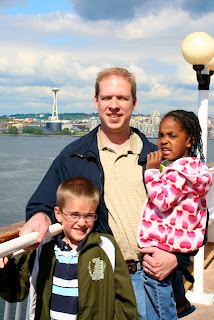 My family really was happy, they just had the sun in their eyes. Speaking of sun, see those blue skies. You aren't going to see many more of those in these cruise pictures.

The Seattle skyline. It truly is a beautiful city. 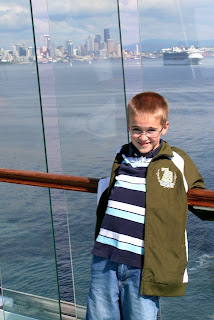 Rob hanging out on the ship. Let me tell you about those glass panels. They are all over the deck of the ship. I had never been on a cruise and I thought they were the stupidest thing ever (they made it really hard to get good pictures), until we actually started moving. Once I realized how windy it was on the boat when it was moving and how great of a job those glass panels did at blocking said wind, I was able to forgive them for ruining a few pictures. 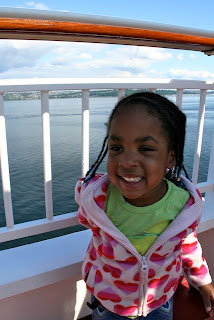 Zoe on the ship. It took a couple of days before I was even able to convince Zoe that we were on a boat. She had been so excited to go on the boat, but it was so big when we boarded that she couldn't really tell that it was a boat. Inside, it seemed like just another building. She kept looking out at the ocean and all the other boats in the water and asking me when we were going to go on a boat. 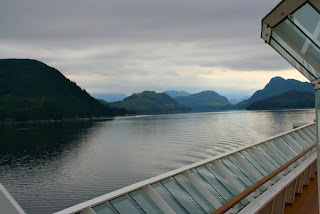 We spent the rest of Saturday and all of Sunday at sea. This was the view from the deck or out the windows most of the time. We could see land on both sides of the ship.  It was always cloudy and a little foggy. The seas were almost always glassy. It was really pretty, but really hard to get good pictures. 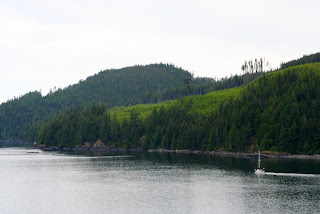 It was amazing how green everything was. 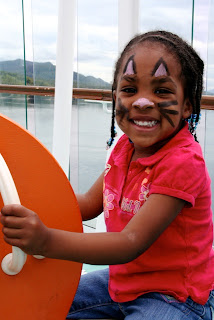 Zoe on day two. They painted her face at kid's club. She was a cat. She thought it was wonderful. Just a side note, by this point in the cruise, it felt like every crew member already knew Zoe's name. Everywhere we went, all we heard was "Zoe, how are you?"  That girl truly has a gift with people. 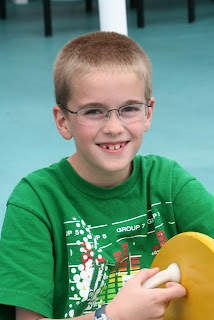 Robby on the ship. 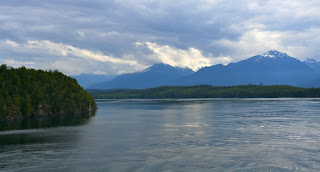 More view from the ship. One thing that amazed us a lot about the landscape was how close the trees grow together. They are packed in there as tight as they can be. 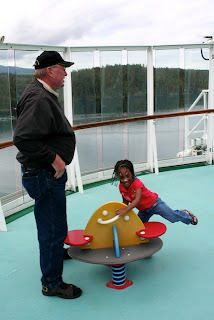 Zoe and Grandpa playing on some of the kid's stuff out on deck. 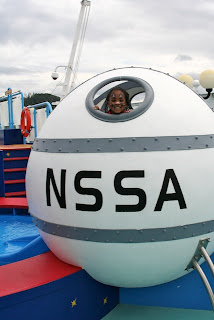 This thing was actually the top of a slide in the kid's pool. We never actually used the pool (brrr!), although Zoe asked several times. 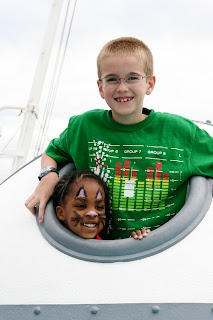 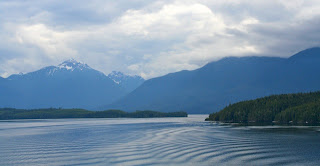 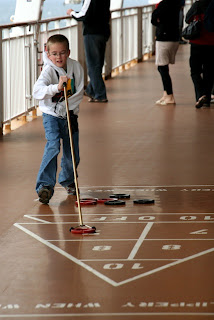 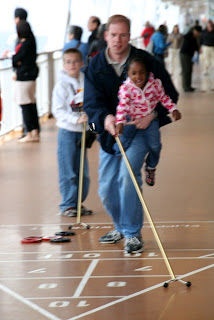 This picture is really blurry, but I had to post it anyway because I love the look on Zoe's face. She thought shuffle-board was a great fun. Turns out, Kirk is not a very good shuffle-board player, when he is trying to hold a three-year old helper at the same time.