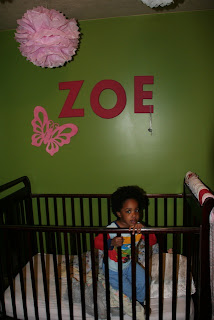 We put off moving Zoe out of her crib as long as we possibly could. It just didn't seem like a good idea to mess with a good thing. She was sleeping well, both at nap time and at night and I did not want to lose that.  Last month though, we couldn't put it off any longer. She decided to start climbing out of her crib, and she was definitely not graceful about it.  She would put one leg over the side, so she was straddling it and then would just throw herself headfirst onto the floor.  The first time she came downstairs, with a bloody lip, saying in her proud little voice "I got out of my bed mom," I knew we had to get rid of the crib immediately. 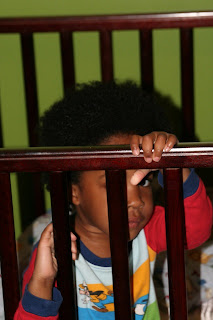 That night, we moved her out of the crib and into the toddler bed. She was so excited. Unfortunately, it was very much the battle I expected it to be. She loves her bed so much, but had a really hard time adjusting to the freedom it gave her.  For the first few nights, it took hours to get her to go sleep.  She wanted to, but she just couldn't stay in her bed. There were too many things to get up and explore. We would finally get her settled down and go downstairs to watch TV. A few minutes later we would hear the pitter-patter of little feed coming down the stairs. She would smile at us, say "What you guys doing?" and we would start the process all over. A few hours after she finally got to sleep, she would wake up because she needed to go potty and it would take a couple of hours to get her to go sleep again.  It was a frustrating few days. 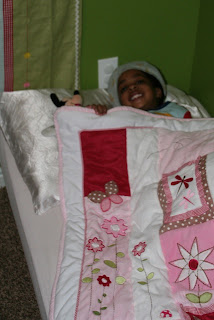 We finally got it figured out though. We discovered that she can be bribed. We bought her a toy that she loved, and told her she could have it when she got 5 stickers. She got a sticker every time she didn't get out of bed, either at nap time or at night. She wanted those stickers and that toy so much, it only took her a few days to get her 5 stickers. 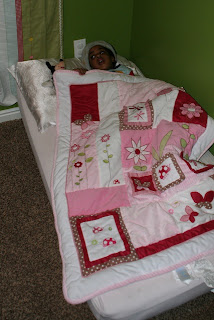 Things have gone pretty well since then. I was sure that moving out of the crib would be the end of naps for her, but that wasn't the case. She still naps almost everyday. She only gets out of bed once or twice at night before she finally falls asleep. She is so happy and proud of her big girl bed. It is a little hard for me to see her growing up so much, but she is so cute laying in her big bed.