All I want for Christmas... 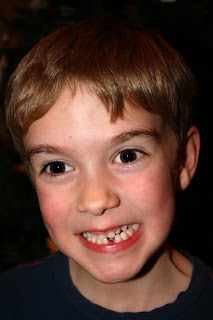 is my one front tooth.

Robby finally lost his first tooth last night.  He has been claiming he had loose teeth for over a year now, so it was pretty exciting when he actually lost one.  It has been close to coming out for a week, but last night I couldn't stand it anymore and finally just pulled it out.  He was so excited that he lost it and even more excited this morning when he saw that the toothfairy had come.  Being 6 is so much fun.

Now Robby and Zoe are having a race to see who can grow a front tooth the fastest.  Any bets?

I was trying to get a good picture of the missing tooth last night, and I had to post a bunch of the pictures I took.  That is definitely my goofy Robby.

Oh, and because I am behind, last Saturday, we watched Polar Express for movie night.  Emily came and watched with us.  We ate pizza and then train cupcakes.  They were yummy. 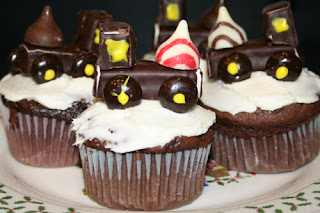 My decorating skills aren't the best, but I should have lots of chances to improve.  I get the feeling cupcakes will be the treat a lot.  They are just really easy to decorate so that they can go along with any movie.
Posted by Alice at 1:13 PM