Cruising To Alaska - Part 7 - The Ship

So, it has been a few months since the cruise.  But, I really need to post this so I don't forget all of it.

We went to Alaska on the Norwegian Star, and I thought the ship was great.  I had always heard horror stories of cruise ships and their strict schedules, dress codes, and assigned seating, so I was glad we went on a cruise without all of that stuff.  We were able to eat whenever and where ever we wanted, never wear anything other than jeans, and set by ourselves at mealtimes.  It was lots of fun. 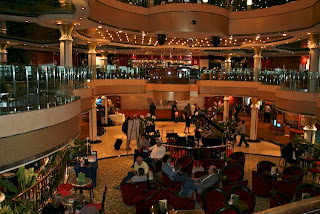 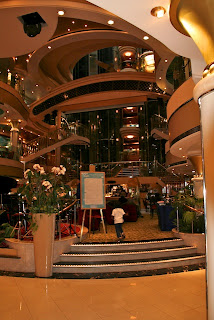 The ship was huge.  These pictures were of the lobby.  Zoe didn't even believe us for most of the trip that we were on a ship. She kept asking when we would get to ride on the boat. I think she thought we were just in a hotel.

Alaska was a great cruise because there was very little sailing in the open ocean.  Most of the time, we could see land out of both sides of the ship.  That was nice because it provided for interesting and varied scenery, but mostly because it meant that there were little to no waves, which means no sea sickness. We were only in open water one day, on the way home, and I was miserably sick. I had no idea I would get so sea sick. Everyone else was fine though, so it wasn't too bad.

The highlight of the cruise for Zoe was Kid's Club.  They had a great program where you could drop your kids off, almost anytime, to hang out and play with other kids. They divided the kids up by age.  They had great counselors and a lot of fun activities. Robby didn't love Kid's Club. He went sometimes, but then a lot of times he just decided to hang out with us. He just isn't a big fan of hanging out with people he doesn't know well.  Zoe thought it was wonderful though. We would always have to fight her to get her to leave Kid's Club to go with us to get meals or to go to bed. She wanted to be there all the time. 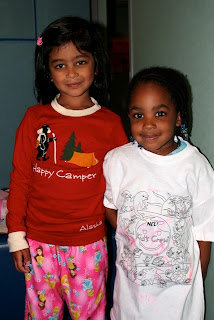 This was one of Zoe's friends from Kid's Club. 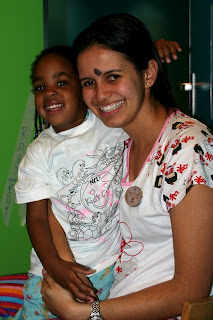 This was Zoe's favorite counselor. They hit it off from the moment we got on the ship.

The food on the ship was pretty good.  The buffet wasn't great. We ate there for breakfast, most of the time, just because it was fast and easy (and there were yummy croissants). For the other meals though, the buffet food wasn't very good.  Most of the food at the restaurants though, was really tasty.  That was Robby's favorite part of the cruise.  He always ordered off the adult menu because he thought the kid's menu was boring. He loved being able to get an appetizer, meal, and a dessert and that no one ever told him that he couldn't order something because it was too expensive.  He was willing to try almsot anything.  I loved watching him eat lobster, asparagus, and all sorts of other tasty things.  His favorite thing was the warm apple bread pudding and the creme brûlée, but he liked the lobster a lot too.

The service on the ship was great. The workers were always super friendly and helpful. I think, by the time we got off the ship, Zoe was friends with just about every person that worked on the ship.

Our room was tiny, but big enough. They made really good use of the space, so there was plenty of room for all of our stuff. 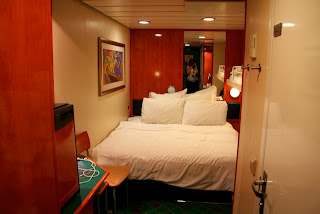 Here is our room from the doorway.  That is about all there was to it. 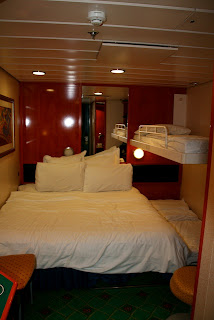 Here are the beds.  There were two twin beds that pushed together for Kirk and I.  Zoe slept on a trundle bed thing and Robby slept on the top bunk. It worked great. 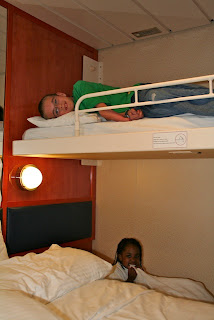 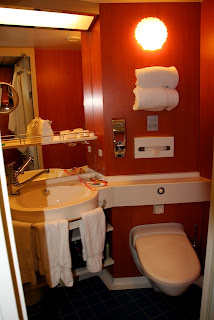 The bathroom reminded me of a bathroom in a really nice RV.  It was really small, but nice.

All in all, the cruise was a great experience. I am so glad we got to go and see a place we would have never seen otherwise. It was fun and I hope we go on another one soon.