So far, we have had a great one.  I am not sure when Halloween became a season, but it seems like we have been celebrating all week.  Thursday, Robby had his Halloween party at school so we all got dressed up for that.  Yesterday, was Kirk's Trick-or-Treat party at work and our ward Trunk-or-Treat.  Today, is Kirk's dad's birthday so we are heading to their house, and he will most likely take the kids trick or treating.  Three days of dressing up is way too much for me, but the kid's are loving it, so all is well.

Zoe thinks this whole Halloween thing is amazing.  She loves dressing up and looking pretty, so she loves her costume.  It helps that she is dressed up as Minnie Mouse so anytime she sees her reflection she starts yelling "icky, icky."  She loves that everyone tells her she is pretty and gives her candy.  She also is fascinated by everyone else's halloween costumes.  She saw someone dressed as a banana at Robby's school and thought it was the greatest thing ever.  She was yelling after him as he walked down hall, "hi nanana."  It was really cute!

Robby has never been a big fan of dressing up.  He decided to be a vampire this year and it worked out really well.  I was planning on painting his face white, but he wouldn't let me.  The kid is so pale this time of year though, that he really didn't need it.  He did let me paint his hair black and use makeup to give him a widdow's peak, which is far more than he has ever let me do before.  I must say, he makes one very cute vampire (and also has quite a resemblance to Eddie Munster.)

I took some pictures yesterday, outside Kirk's office.  Here are some of my favorites. 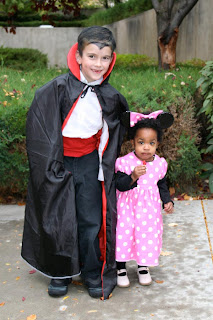 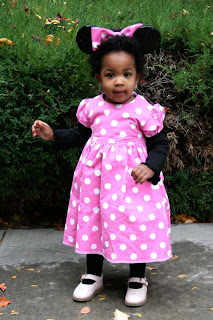 She makes such a sweet little Minnie Mouse. 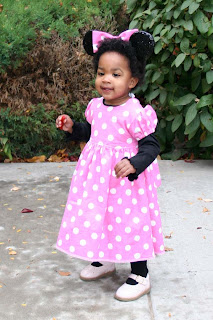 Her hair works perfect for this costume.  It makes her ear headband just blend right in.  So cute! 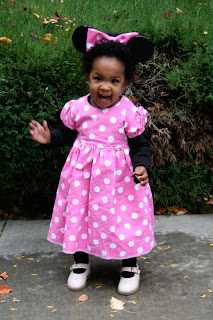 This picture just makes me laugh.  She looks like evil minnie.  Really though, she was just happy and giving me a funny smile. 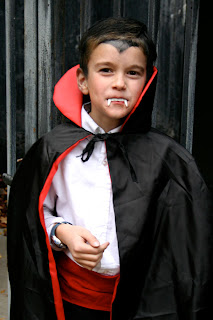 Robby with his vampire teeth in.  He didn't wear them very much, but since he is missing his two front teeth, he kind of looks like a vampire anyway. 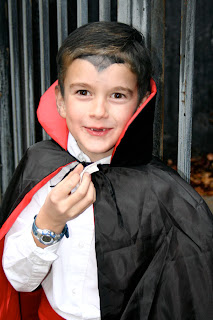 Move over Edward, that is one good looking vampire.  Looking at this picture makes me wonder where my little boy went. 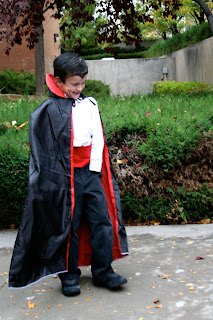 Pretending to be a vampire. 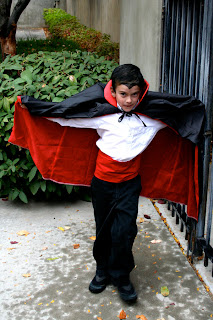 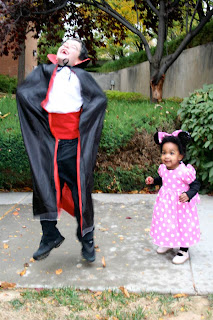 They were having so much fun playing around.  This is probably my favorite picture even though it is blurry. 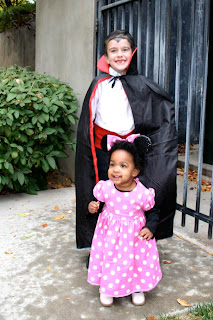