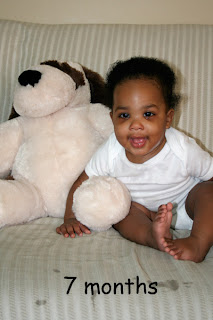 ... legally ours.  We even have a birth certificate and adoption decree to prove it.

... totally in love with food.  Especially anything that appears to be grown-up food.  She loves eating things like pasta, bread, chunks of cooked vegetables, basically anything that comes off my plate.  She also never says no to a jar of baby food.  Over the past month we have discovered a number of odd tastes that she likes including salsa, pickles, and even lemons. That girl loves her food.

... saying dadada and mamama although at this point she has no idea what they mean.

... still pretty much immobile and not at all happy about it.  She now refuses to sit up for long.  Instead, she dives onto her belly, convinced she is going to take off across the floor.  She gets up on her hands and knees and rocks, but that is far as she is going at this point and she finds that very frustrating.

... very attached to her mom.  She doesn't like to let me our of her sight and is getting very wary of strangers.  I have to admit, sometimes it is kind of nice to know she loves me so much, but it can also be incredibly annoying.

... finally getting some hair in her bald spot.

... hating that she has to wear socks.  She is always trying to pull or kick them off.  She will love the summer.

... in love with water.  She thoroughly enjoys her bath.  She loves to stick her head in the water as it is coming out of the faucet.  The other day I let her "swim" in my big bathtub and she loved it.  She would just dive right in.  She is so opposite of Robby in that way.

... the greatest daughter we could ever ask for.  We are so incredibly blessed to have her.
Posted by Alice at 8:48 AM