A couple of days after Christmas, we went with Kirk's mom to visit family in Arizona.  I was very nervous about the trip.  It takes almost 12 hours and the thought of spending that long in the car with a baby who screams the moment a car seat is in sight, was not a happy one.

The trip was awesome, and the drive was not nearly as bad as I expected.  Being crammed in the back of the car between two car seats for 12 hours was definitely not a lot of fun, but it was tolerable.  Zoe was a little trooper.  She did wonderful on the way, except that she screamed pretty much nonstop for the last 2 hours (I can't blame her though, all of us wanted to scream by that point, she was just the only one willing to do it.)  And on the way home, she really didn't scream or even cry much at all.

Arizona was wonderful.  We stayed at Kirk's aunt and uncle's house.  It was lot of fun because one of his cousins was there at the same time with her three kids, so Robby had kids to play with.

We ate a ton of good food.  In fact, every day seemed to revolve around what we were going to eat and how we were going to schedule it so that we could eat as much as possible.  The Mexican food there is unbelievably  tasty so we ate Mexican for almost every single meal.  In fact, the only time we didn't eat Mexican was the day we had Chinese food at my favorite Chinese restaurant.  The whole time we were there, I was complaining about the fact that we don't have food nearly as good here.  Now that I home though, I have decided to be grateful for our lack of to die for food.  If we had food that good here I would probably weigh 300 pounds.

The weather in Arizona was great.  The highs were in the upper sixties, which was just perfect.  It was a little tough to come home to our winter wonderland.

We got to spend a lot of time with Kirk's family.  It was fun to see his aunts and uncles and his cousins and their kids.  We don't get to see them very often, so it is always nice to be able to get together.  Robby had a blast playing with his cousins.  Zoe got a cold on the trip, so she had a couple of rough days.  I ended up spending a lot of time, where ever we happened to be, holding her so she could sleep, but I think she enjoyed the trip too, especially the sunshine and being able to be outside. 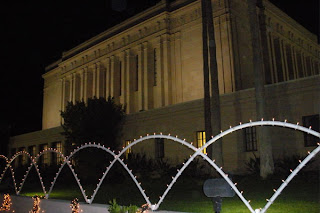 One night we went and saw the lights at the Mesa temple.  It is so nice to be able to go see temple lights without freezing your tail off.  They were beautiful and the weather was beautiful. 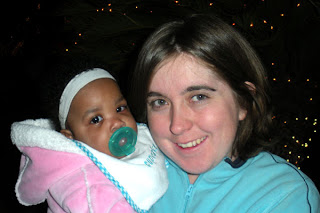 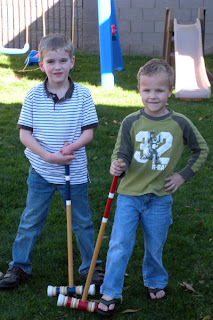 This is Robby with one of his cousins, Thomas.  They are only a few months apart in age.  They were so funny together.  They are so much alike.  They were always trying to figure out which one of them was the smartest and were constantly competing with each other.  They were pretty evenly matched too.  I was amazed they got along as well as they did, but they really had a blast together. 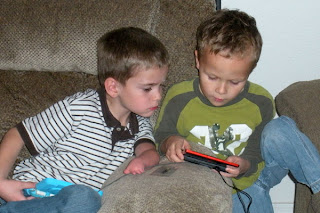 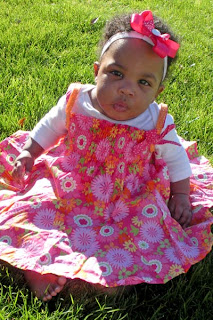 Zoe loved just hanging out in the sun.  She was so sick this day, so there was no way I could get a smile out of her, but she just sat there in the grass for a long time, just chilling.  She is definitely an outdoor kid so this chance to escape the winter was fun for her.

It was a really great trip and I am glad we decided to go.  But like always, it is really nice to be back home.
Posted by Alice at 9:41 AM